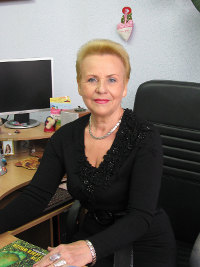 Has been working at NMetAU since 1979. First, after graduation from the Dnepropetrovsk State University in the specialty of 10.02.04-Germanic languages, she worked as a teacher, then a senior teacher, and then an associate professor of the department. Since 2003 she has headed the Department of Translation and Foreign Languages.

At different times, she received an internship at the Dresden Technical University, majoring in Technical Translation (Germany) (1989), at the Goethe-Institute majoring in Foreign Language for the Profession (1999), Eastbourne School of English for "Modern Techniques and Techniques for Teaching English for Special Purposes" (England, 2006).

Within the framework of the TEMPUS program, she headed the group for the development of the newest "Program for Foreign Languages ​​for Academic Purposes for Masters and Graduate Students of Metallurgical Institutes of Ukraine" (in collaboration with the Technical University of Freiberg Mining Academy (Germany), Eastbourne School of English (England).

She has extensive translation experience. She has translated into business negotiations, conferences, seminars, symposia, manufacturing, banking, and utilities in both Ukraine and Germany.