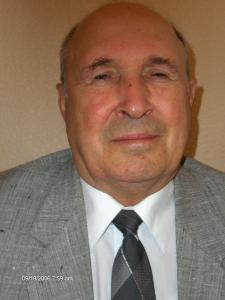 He was born in 1936. In 1959 he graduated from Ural Polytechnic Institute (Sverdlovsk), and after working for 1 year in the foundry plant Energozapchast ", was an assistant at the department of metallurgy became UPI. In 1962 he enrolled in graduate DMetI. In 1964 he defended his thesis and worked at the Department electrometallurgy assistant (since 1968) and lecturer (from 1969). In 1979-1982. worked at the Polytechnic Institute of Conakry (Guinea) and in 1988-1992. the Tunis Summit Institute. In 2003 he received the title of professor in the Department of Metallurgy of nonferrous metals.

The main direction of scientific activity is to develop ways of utilization of metallurgical wastes for obtaining and refining of secondary non-ferrous metals and alloys.

Published in co-authored four monographs and three textbooks, has more than 90 scientific articles, 10 inventor's certificates. Under his supervision three theses.