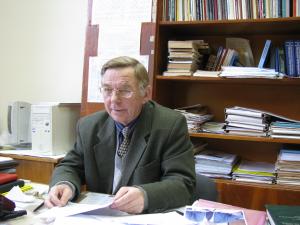 Having finished{stopped} the Dnipropetrovs’k metallurgical institute with distinction in 1968, works from this year in DМеti (now NМеtАU). The basic directions of scientific and scientific and pedagogical activity: researches of balance of binary and figurative systems, the nature of chemical connection of manganese, silicon and phosphorus in monomineral versions, natural and artificial oxides materials on the basis of manganese; researches of thermodynamics and kinetic of carbon regenerative processes; reception alloying and modifiers on the basis of seldom ground metals, the titan and vanadium; introduction in manufacture of technology of melt ferro silicone manganese with use of secondary raw material and carbonaceous ferro manganese silicone thermal way.

The amount of proceedings - 212, the co-author of 18 inventions and patents, 6 of which is introduced in manufacture. It is prepared in the co-authorship of 8 manuals and one textbook.

Under his management is protected three master's theses. With 1985 for 1988 worked in the Algerian democratic Republic managing faculty of metallurgy university of Anaba.