The biggest and most expensive good every nation has its own speech.

“Language is the form of our life,

it is the form of our organization.

Language is the soul of every nationality,

her holiness, her most valuable treasure…”.

In the process of teaching and educating the younger generation, the formation of personality, speech plays an important role. Especially important now is the study of the Ukrainian language as the state language, which contributes to the unification of Ukrainians not only in Ukraine, but also abroad, the development of the cultural heritage of the Ukrainian people.

To the attention of our readers we present a book exhibition

"Language is our roots."

The work is devoted to the development and current state of the Ukrainian language in all the difficulties of its formation, which receive comprehensive coverage (geographical, historical, sociological, cultural, etc.) in comparison with the corresponding situations in other languages of the world. Written in a popular form, the book is assigned to all fans of the Ukrainian language.

The textbook contains information about the origin, development and structure of the modern Ukrainian language as an integral functional system. The oral (sound) and written (spelling) forms of it are considered. Some linguistic phenomena are reflected in a new way. For students of ZVO. It may be useful for those who independently improve their knowledge of the Ukrainian language.

A holistic systematic presentation of the syntax of the modern Ukrainian literary language is presented. An attempt has been made to review the main areas of study of Ukrainian syntax. Each section contains a system of exercises for practical exercises. For students of philological specialties of universities.

A person learns his native language from childhood from his parents, from the environment; at school - studying school subjects; in adulthood - communicating with other people, reading a variety of literature, learning about the world around ... 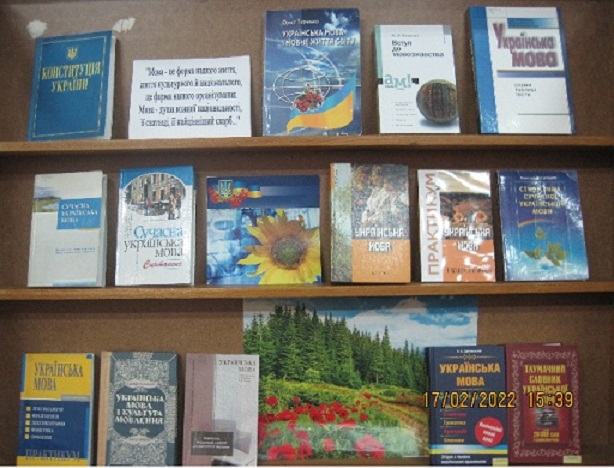 Get to know the publications we invite you to a subscription of scientific literature, room. 259.