Was born on November, 6, 1923 in village Adamovka of Krinichanskiy area of Dnepropetrovsk region. Graduated secondary school in June 1941. He is participant of Great Patriotic War (November 1941 - September, 1945). Graduated Dnepropetrovsk metallurgical institute (1952). Lectured in State metallurgical academy of Ukraine (since 1952 - assistant, since 1959 – senior lecturer, since 1967 - associate professor, since 1982 - professor). Candidate of technical sciences (1967), professor (1992). Head of departament of foundry manufacture and supervisor of studies of Branch rolling laboratory of Minchermet of USSR and Ministry of education of USSR(1976-1982 г.г.). In 1970 and 1975, in a post of professor lectured at Central University in Santa Clara city (Cuba). In 1975-1982 a member of methodical commissions of Ministries of education of USSR and Ukraine. In 1975-1997 headed foundry sectionНТО ЧМ of Ukraine. In 1975-1981 - editor of the unit "Foundry manufacture" of collection "Metallurgical and mining industry". Has published more than 350 proceedings, including more than 50 copyright certificates. Has prepared 12 candidates of technical sciences. Lectured in NMetAU disciplines: "Bases of theory of melting", "Manufacture of castings from alloys of iron", "Manufacture of castings with special properties from cast irons and steels", “Designing of foundry shops”. Basic proceedings are: “Bases of scientific researches in foundry manufacture” (1979), “Ultrasonic methods of quality checking in manufacture of castings” (1984), “Development of technology and equipment for centrifugal moulding of rolls of rolling mills” (1988), “Organization of metallurgical experiment" (1993). “Modifying highcarbonaceousalloys of iron bycarbonitephases” (1995). Belaj Grigory Emeljanovich died on February, 26, 2003. 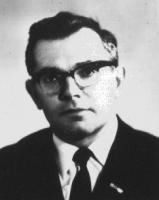