Adamov Ivan Vasilyevich was born on September, 12, 1937 in station Sinelnikovo. In 1955 graduated secondary school№39 of station Sinelnikovo I. In 1955 entered DMetI which graduated in 1960 and was left to work on departament of foundry manufacture. Since 1962 to 1965 studied in postgraduate study, in 1967 has defended a thesis of candidate of technical sciences. Since 1967 has been working as associate professor of departament of foundry manufacture. During 1967 - 1972 worked as substituent of dean of metallurgical faculty. He was three times sent to mission trip byМВССО ofUSSR abroad. From october, 1966 till august, 1967 passed scientific probation in Higher school of foundry manufacture of France. From september, 1972 till august, 1975 worked as the lecturer of the Algerian national institute of oil, gas and chemistry in ANDR. From september till december, 1977 read lectures and passed scientific probation at university of Laval (Quebec, Canada) … Ivan Vasilyevich - was outstanding highly erudite person with encyclopaedic knowledge in various areas of a science and technics. Such qualities, as high professionalism of scientific worker and pedagogue were inherent to him; natural talent of skilful story-teller and clever interlocutor; reliable, sensitive and sympathetic comrade, person principled and emotional, expert and amateur of literature, subtle connoisseur of fine in all its displays. Ivan Vasilyevich Adamov died on May, 6, 2001. 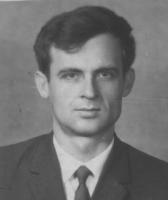