Oleg Nikolaevich Rudnev's working career (30.09.36 - 10.03.2004) is typical for people devoted to their profession - profession of pedagogue and tutor. He has passed big way from student DMetI (1953-1959 г.г.) up to dean of one of leading faculties of NMetAU (since 1987). After graduation of institute he received a necessary production experience (1958-1959 г.г.), and then came back in native DMetI with which has for ever casted in lot. From assistant (1959-1962 г.г.), post-graduate student (1962-1972 г.г.), scientific employee of Scientific-research sector (1965-1972 г.г.) up to a post of associate professor (since 1972) Oleg Nikolaevich constantly raised his scientific and pedagogical potential that has allowed him to become one of the most highly skilled pedagogues and tutors of students. Such people are pride of our academy. Intelligence and communicability, self-discipline and diligence, obliging and adherence to principles, kindness and consideration, sharpened feeling of justice and friendliness in a combination with sober optimism, which were inherent to Oleg Nikolaevich, caused respect of everyone who knew him on scientific, pedagogical or public work - from first-year student up to minister. 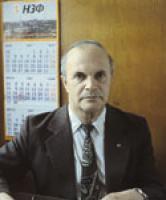