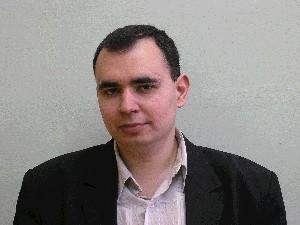 Was born in Dnepropetrovsk on 16.05.1974. After graduating of the Dnepropetrovsk metallurgical academy in 1996 has entered the postgraduate study which has ended in 1999. During the period from 1999 to 2002 worked as the engineer and then the chief of a bureau of foundry technology on the Production association "South machine-building plant". Since 2002 - assistant of departament of foundry manufacture of National metallurgical academy of Ukraine, at the moment works in a post of associate professor.

The basic researches are led in the field of manufacture of castings on basis of aluminium foundry alloys, author of 12 scientific works, including 1 invention on development of aluminium foundry alloys received on a basis of remelting of waste products of deformable alloys. New scientific developments concerns to methods of complex alloying, modifying, refinement, physical influence on alloys of nonferrous metals in liquid and solidifying conditions.